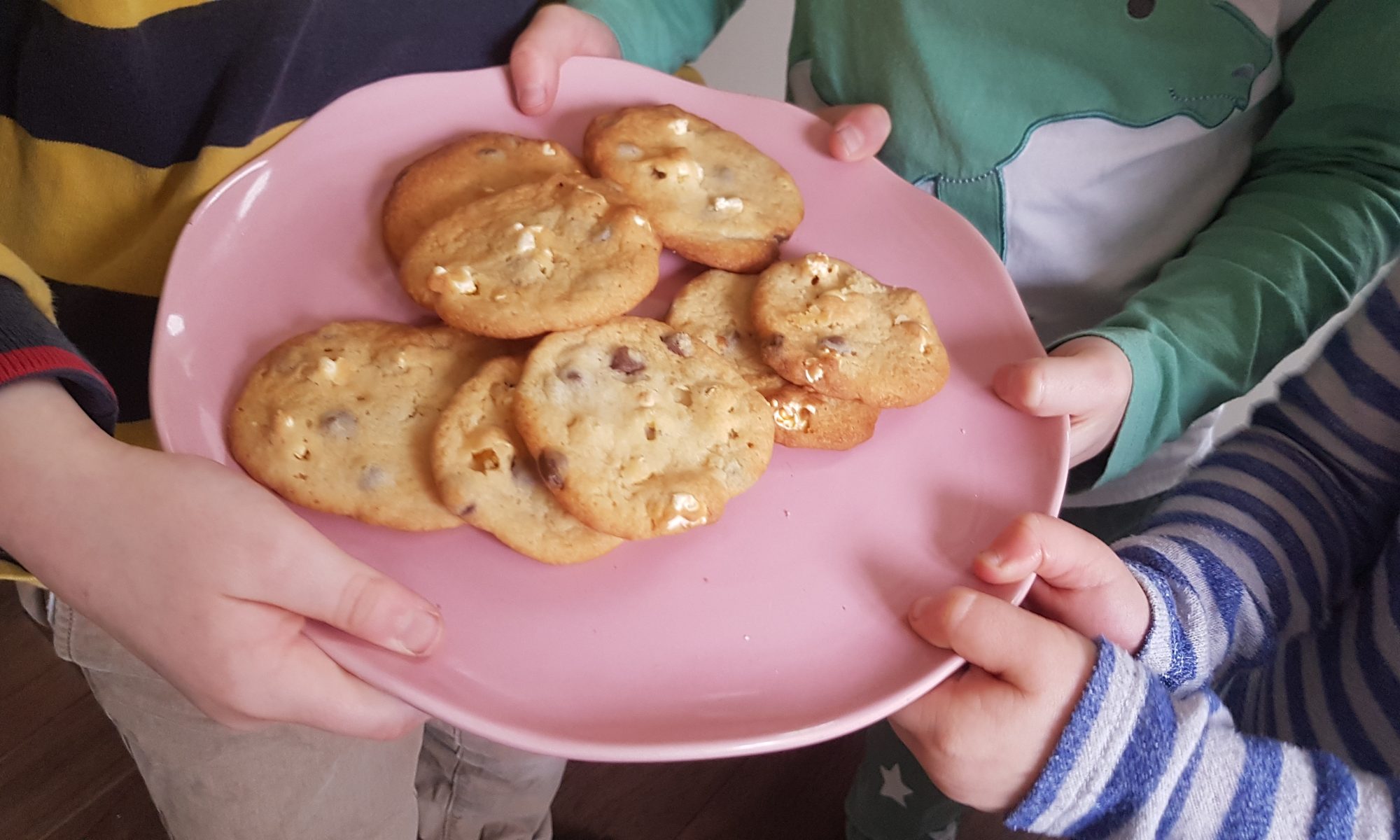 The kids love meeting up with their friends and I love it when the kids meet up with their friends. It generally means a calmer afternoon when they are all playing and I get a hot drink which is actually still hot or maybe even 2 if all the kids are happy. I love it even more when I don’t have to host. Don’t get me wrong, we do invite people to our house, but the organisation it requires for me to have enough of our chaos tidied away stresses me out somewhat. To balance out my reluctance to host playdates, we never turn up empty handed. This means cake, or biscuits or sometimes even both! For our most recent playdate I went armed with these Chocolate Popcorn Cookies. Note to the wise though, next time, don’t place them in a backpack and jog alongside the four year old who is gaining confidence on her bike without stabilisers. When we arrived, most of the cookies were broken. This did reduce my guilt at eating cookie pieces as I didn’t eat a single cookie at once!

These cookies were an experiment. Finch has inherited his mum and dad’s love of the chocolate/coconut combination. Unfortunately, the playdate hosts disagree so I wouldn’t allow him to add desiccated coconut to the cookies. To placate my gingernutter I suggested we added some of the leftover popcorn from our movie night the evening before. This suggestion was met with immediate enthusiasm and as a result I cannot say for sure how much popcorn we actually added… Oh well! This recipe is versatile and can easily be made vegan by using vegan spread and chocolate. We used golden syrup as it was what we had in the house, but maple syrup would work just as well.

In my mind these cookies are a perfect accompaniment to a lovely cup of coffee. The kids enjoyed them while running around with their friends. I am currently fighting the urge to go and make more popcorn to make another batch… 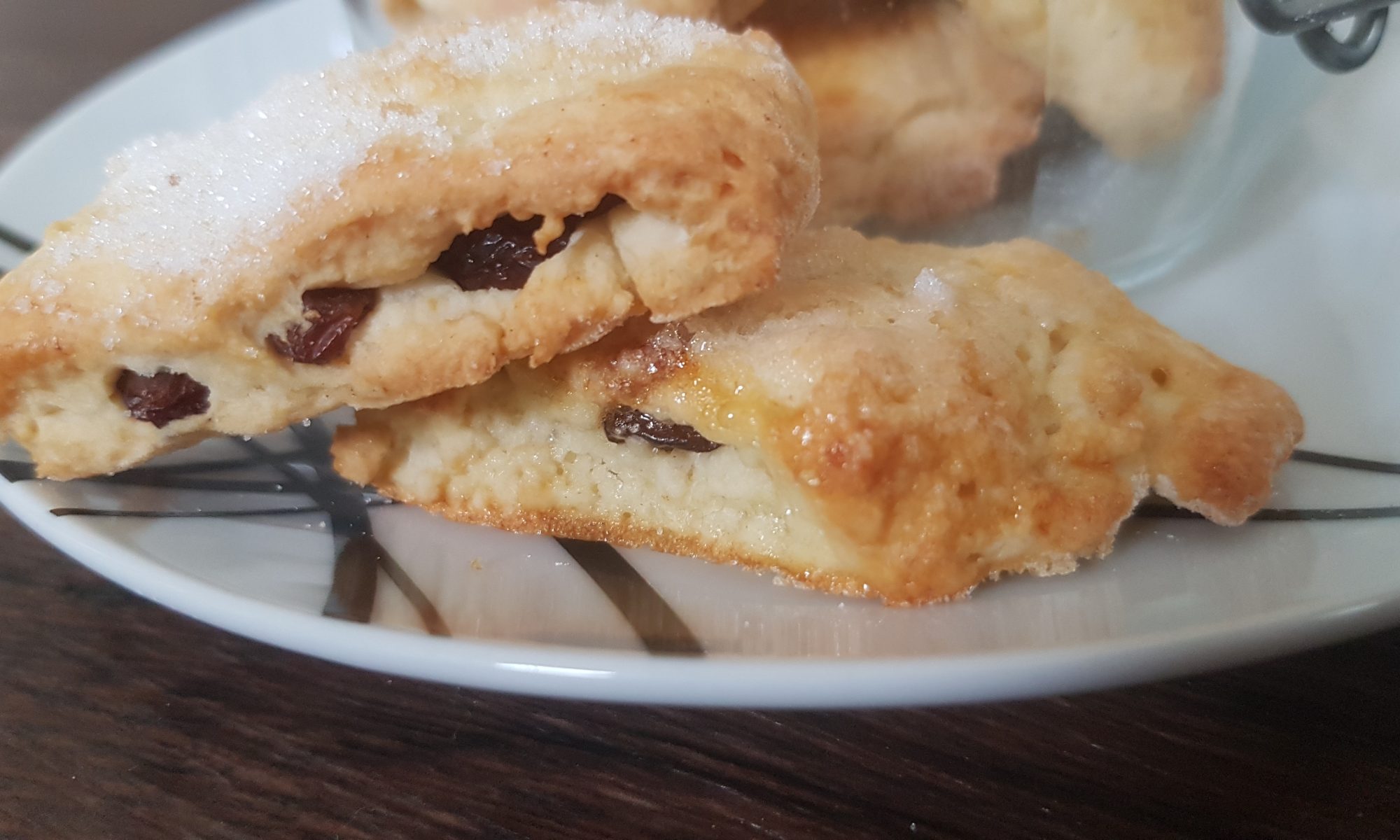 I sent my husband to the supermarket for biscuits and he returned with a nice selection including Garibaldi Biscuits. To our horror, we realised that the kids had never seen, let alone tried Garibaldi biscuits. In order to fill this gap in their culinary education, we described this favourite teatime treat and told them that they are also known as squashed fly biscuits. They found this hilarious and after trying them they were an instant hit. As all good things come to an end, we finished the packet (not really surprising in a household of five!) and we had three rather sad children. Ophelia and I hit the kitchen to have a go at making some ourselves.

This is a very tactile recipe for kids. Ophelia loved rubbing the flour, butter and salt together to make fine crumbs. She was talking to it, telling it that she was tickling it and listening out for it laughing. Then there came mixing and flattening it out with her hands before attacking it rolling it out with a rolling pin. More raisins than I can count were diverted into her mouth rather than the recipe, so we did have to replenish them. My main thought was at least this time she wasn’t trying to guzzle a mixture with raw eggs!

Our biscuits definitely didn’t look professional, but Ophelia was rather insistent that she wanted to do as much as she could by herself. This didn’t affect how yummy they were, only that ours were somewhat thicker than your average shop bought Garibaldi. They disappeared in less than 48 hours and there have been requests to make more for our biscuit tin.

To make Garibaldi Biscuits you will need: