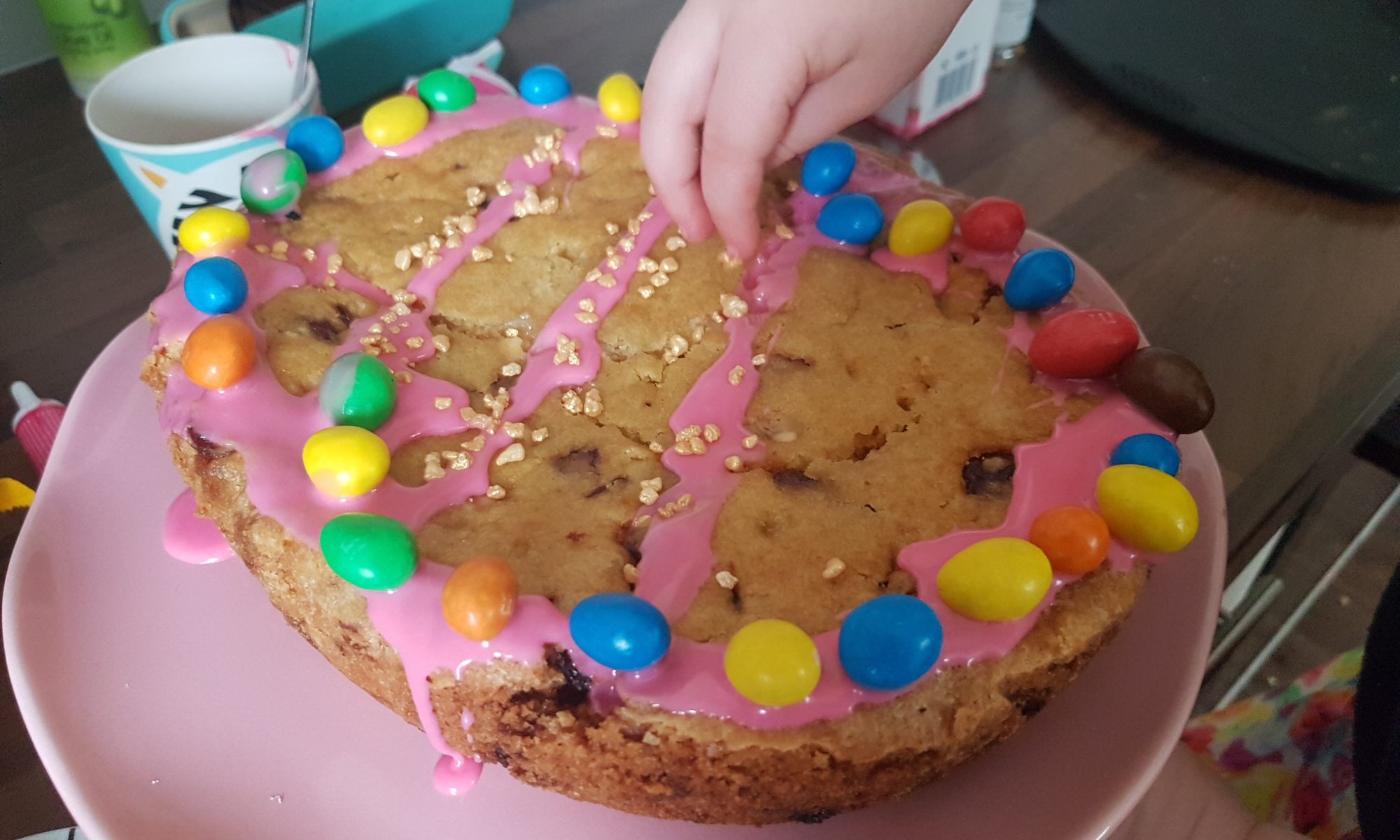 It has been a strange month. Life has changed significantly, but as we approach Easter I am remined of new opportunity and being grateful for everything that we have. I am trying to tell myself that this extra time with the children and their dad at home is a blessing, but I am constantly reminded of my shortcomings and lack of patience as I try and help them with their school work and have them ‘helping’ me with the chores, making them take three times as long. I find safety in familiar ground with them and for me that is cooking with them. We have cooked in the happiest and hardest times of my time as a mum and for me this period is no different. In all the time we have spent in the kitchen we have had some wonderful successes as well as monumental failures. Examples the latter would be a whole bottle of coconut essence working its way into a batch of cupcakes or neglecting to add sugar to another batch… But I have to say I don’t remember how either of those bakes turned out, what I remember is the delight in my kids’ voices when they have been able to do something they hadn’t managed before, or their happy chocolate-stained faces after licking the bowl.

The kids and I frequently make soup in the slow cooker and have also used it to make a delicious steamed lemon sponge, but after brainstorming Easter cooking activities with my cook books all around me, I realised that the base of my slow cooker is shaped like an Easter Egg. When I pointed this out to the kids, they were excited. They could tell their mum was about to suggest an activity and indeed I was; a Slow Cooker Easter Egg Cookie. 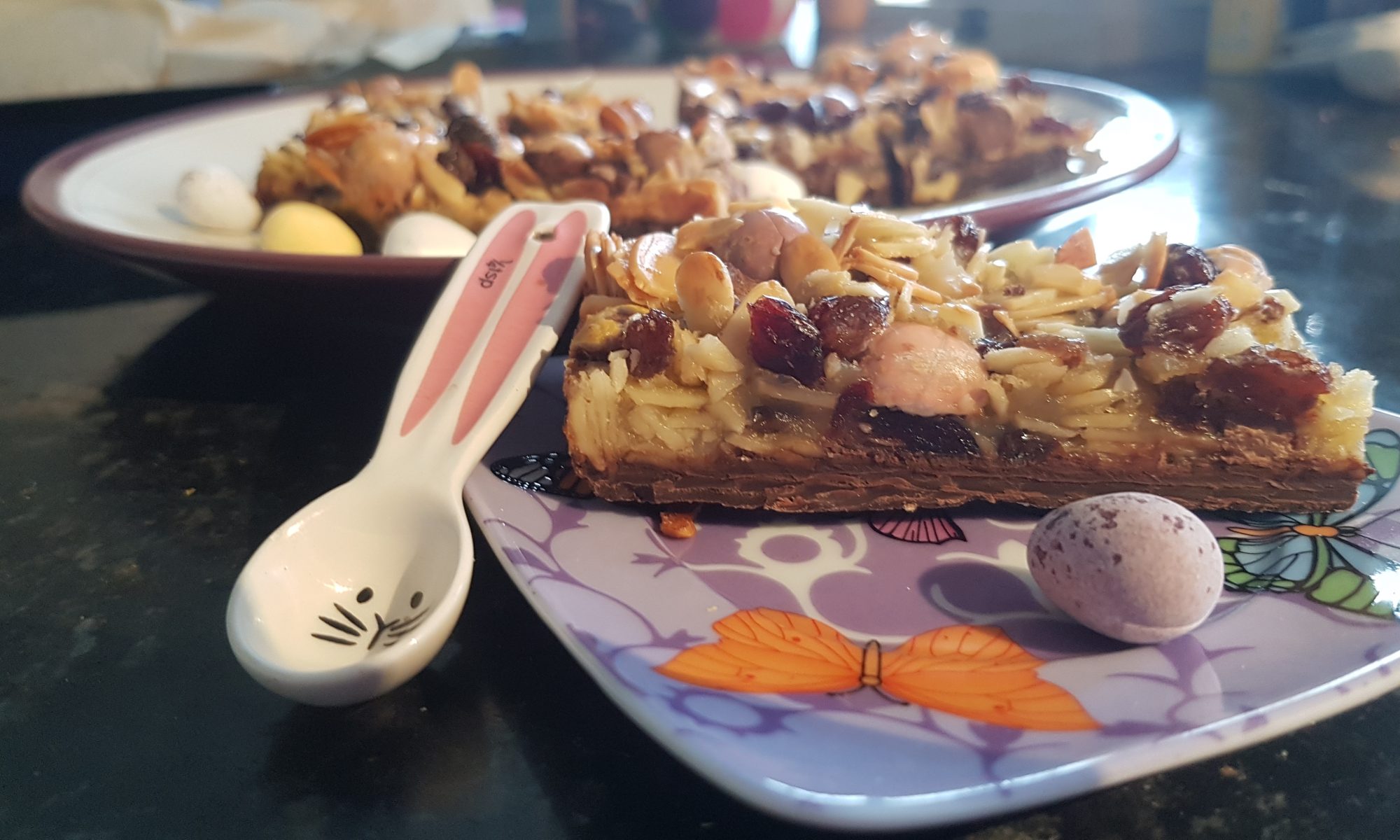 There are generally copious amounts of chocolate in our pantry. I keep on contriving new places to sneak more into the house away from the kids’ (or my husband’s) prying eyes. Usually this is a challenge, but when we approach Easter (or even Christmas for that matter), my task seems to become nigh on impossible! However, I am a stubborn woman and where there’s a will there is a way! In our house, chocolate falls into several categories; general eating chocolate, chocolate for a particular purpose (such as a cake or bake) and Kat’s chocolate. Over the years, Simon has learnt, that he is better not to waste his breath asking me to share my chocolate as it will end in an argument. The safer course is for him to wait for me to offer him some. I am very good at offering him the dark chocolate, which he doesn’t like so I get to keep, but not so accomplished at sharing the chocolate that he would actually enjoy!

Easter baking wouldn’t be complete if it didn’t involve Mini Eggs. They are totally addictive and would be welcome all year round! This year, I decided to put Mini Eggs into my mum’s favourite biscuit – the Florentine. These Florentines are not at all authentic, but that doesn’t stop them from being remarkably moreish. We melted the base chocolate and allowed it to set in the bottom of the pan before cooking so it didn’t take quite so much time to make. Please please please though, if you are baking with Mini Eggs and small children do not ignore the step to crush them or chop them up.

Unfortunately we are not seeing my mum until just before Easter and it is highly unlikely there will be any left by then! Sorry mum! I peer at them every time I open the fridge, just to check they are still there (and inhale their gorgeous scent) and to ensure no children have come to treat-nap them! I should also add, the kiddies had small squares. I did have a large slice after giving blood, but I considered that that was well deserved! 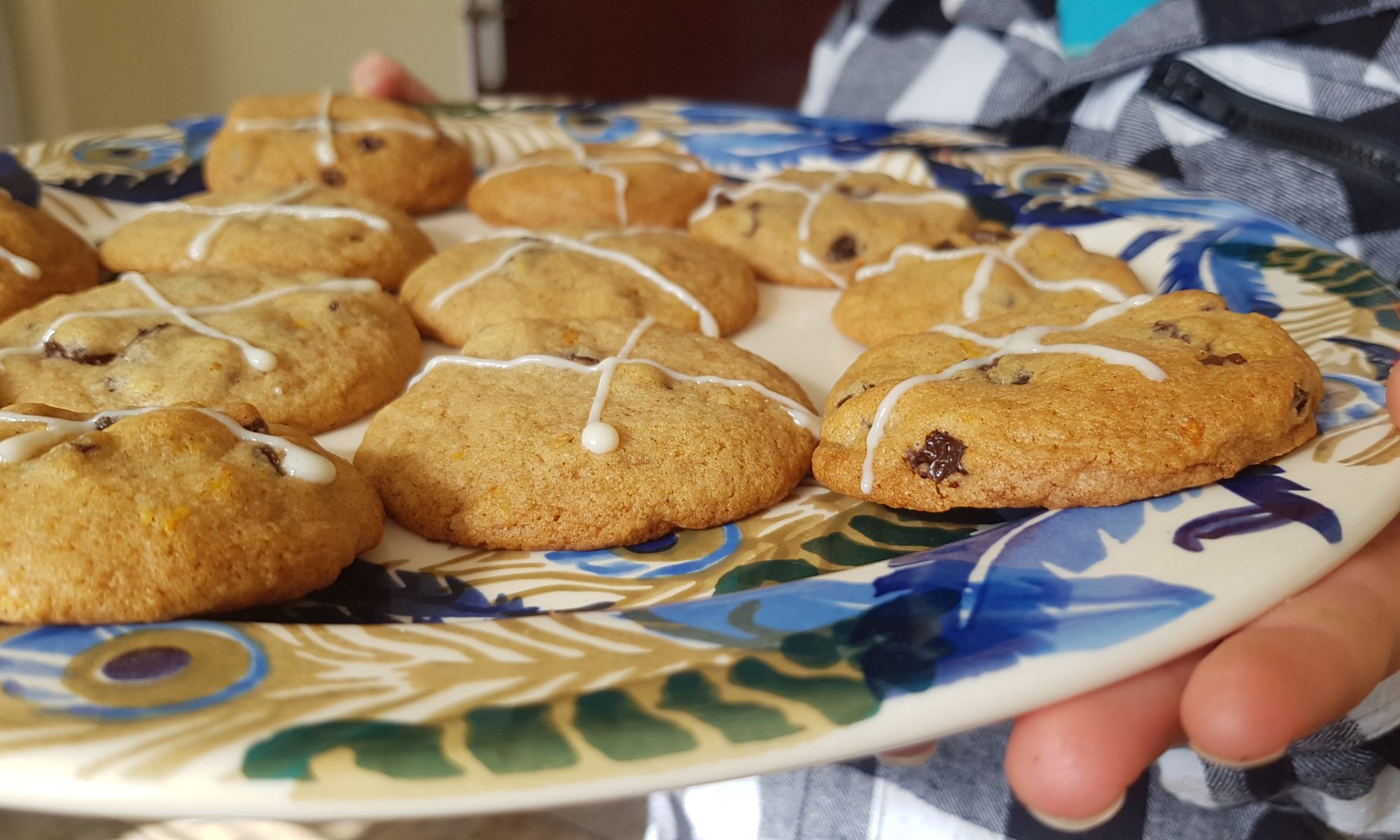 I love a good hot cross bun. They are wonderfully squidgy and are so yummy when toasted and lathered in chocolate spread (sorry I am not a purist as I am not a fan of butter). I don’t make a habit of buying hot cross buns until the Easter holidays as if I do, I know that I will eat them all and happily forget that the kids also enjoy them. My husband is out of sync with the rest of the family on this one – he would prefer, well not to be obliged to eat a hot cross bun I am sure!

I have made hot cross buns in the past, but not with the kids. I remember it being a somewhat lengthy process and not necessarily compatible with my kids’ tiredness levels during term time. However, I did want us to make something related to our faith and have an opportunity to talk with them about the Easter story so I decided we would make cookies as they take less time. As an added bonus, we could make them smaller and perfect for an afterschool snack without having to share a whole hot cross bun and causing arguments over who gets which bit! I don’t know about your kids, but mine will argue over literally anything and make it look like an Olympic sport! Anything not to run the risk of an argument over what I would consider a small inconsequential occurrence, which is clearly the biggest injustice since the previous occasion!

We used melted butter in these cookies to recreate the squidgy texture of a hot cross bun, and added orange zest, cinnamon and raisins to replicate the flavours of them. We used icing pens for the crosses, but my eldest had some difficulties piping these out so had help. Alternatively, you could use icing sugar and water, melted white chocolate to pipe a cross on them or cut crosses out of rolled marzipan to stick on. It seems the options are endless! Seb actually quite enjoyed directing me and rating my attempts at putting crosses on the cookies!

These were delicious cookies. If your little ones aren’t a fan of raisins, you could substitute them for chocolate chips. Do let me know if you make these with your monkeys or without them as that is also an option! 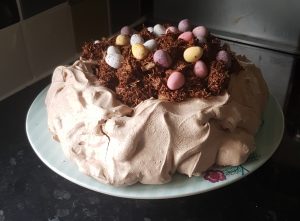 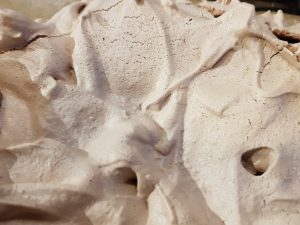 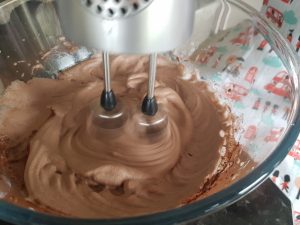 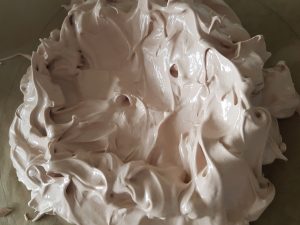 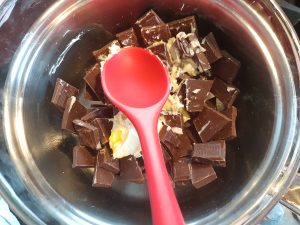 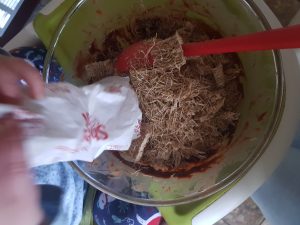 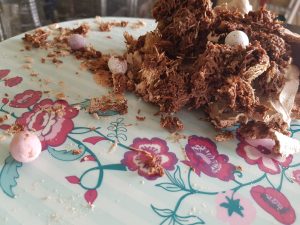 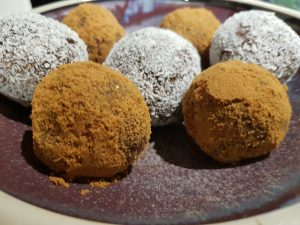 I love chocolate, I love eating it and cooking with it. I even have a hand cream that makes my hands smell of chocolate that sometimes tricks me into believing I have had my chocolate fix for the morning without actually consuming any – this is a bonus as it means that I can eat more chocolate later! So chocolate is always good, but when combined with any sort of cake it becomes better and I seem unable to put my finger on why this is. It is the reason I tend toward homemade edible gifts at Christmas and Easter. This year I have made ‘Easter Scotch Eggs’ for family and friends. I made these for the first time last year and they went down so well that they had to have an encore. I mean the Creme Eggs were practically begging from the pantry to be snuggled in a chocolate-rich mixture to keep them warm in the unseasonably cold weather we have been experiencing recently.

Essentially what they are is a mini Creme Egg or equivalents encased in brownie mixed with buttercream and covered in crushed ginger biscuit or desiccated coconut (or sprinkles if you like). You don’t even have to bake: if you really want to cheat you could buy shop-bought brownie and buttercream. Part of the attraction of these for me though is making the brownie and buttercream. Children could put them together. That said, my oldest is only 5 and I doubt he would be able to resist licking his fingers during the process and as these were destined to be gifts, the kids made Easter cards and received a running commentary of the process. Needless to say, the boys are both desperate to help make some so they are already on our list for next year, but in a smaller batch so they can help. 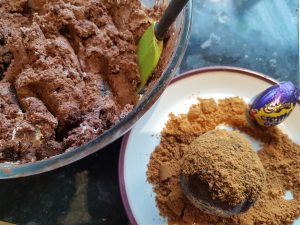 To make this recipe you will need:

For the buttercream: the below amounts are guidelines as I never measure exactly, it just goes in the mixer. However, the buttercream does need to be quite rigid to hold the crushed brownie together around the Creme Egg. 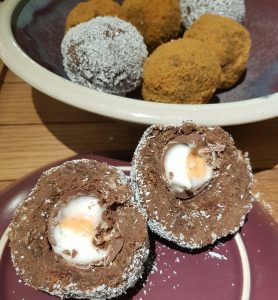 For these I do recommend using mini Creme Eggs or Caramel Eggs because the large ones do make a very big scotch egg, especially if you want to cover them in a thick layer of brownie like I do. However, the larges one look good when sliced in half as it is easier to expose the fondant yolk and if you don’t intend to have any other calories that day, why not?! 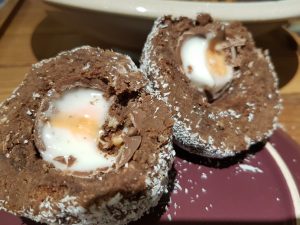