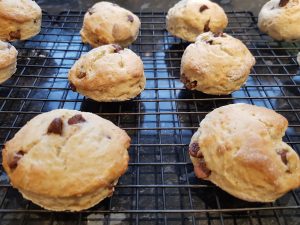 I love bears and Winnie the Pooh is my all time favourite and has been since I was a small girl. My children love bears too, but they will not be influenced by mummy’s preferences: they do seem to like Paddington more than Winnie the Pooh. It might be because they have seen Paddington at the cinema, the marmalade jar has Paddington on it or simply because he is such a mischievous character that appeals to their own mischievous natures.  Ophelia has some vests with Paddington on them and she takes great delight at trying to pronounce Paddington.  I must admit that the first time she said it, I had to really concentrate to understand what she was saying.  A couple of minutes later it occurred to me that she was trying to pronounce Paddington – quite a difficult word for a 18 month old! She was, understandably, very proud of herself.

Behind chocolate spread, marmalade is Seb’s favourite topping for toast and crumpets and we often have a ‘Paddington lunch’ which is essentially a lunch of a marmalade sandwich often reading Paddington stories. To keep my life interesting, I thought we would try something new. Before you ask, yes my life is already quite hectic managing the three kids, but I do love to see their delighted faces when engrossed in an activity – any stress its preparation may have caused immediately vanishes. For pudding one evening, we created Paddington Toast from images we found online.  For us, this comprised a slice of orange fruit loaf (the closest flavour to marmalade!) toasted and cut into a circle with a biscuit cutter, covered with chocolate spread marked with a fork to look like fur, a strawberry and jelly bean hat (why do we always run out of one particular colour of jelly beans?!), a couple of blackcurrants for eyes, a Toffifee sweet for the nose and an icing smile. The kids had fun making these and they disappeared pretty sharpish. To make this a healthier snack, you could substitute the fruit toast for a rice cake, use peanut butter and a slice of banana instead of the sweet. The example that I made for the boys to copy is the one at the top. 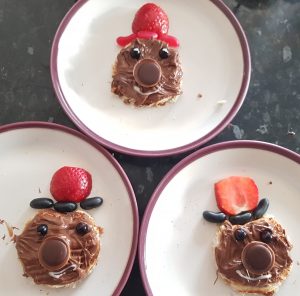 This in turn got me thinking what would we do if Paddington ever comes to tea? You never know, it may just happen – I bet Sophie and her mum weren’t expecting a tiger to turn up on their doorstep, so in the unlikely event that Paddington ever does come to tea, my kids can impress him with their chocolate chip marmalade scones! Just like Sophie’s mum bought a tin of tiger food, I may be prepared with the ingredients ready to make these yummy scones if the need arises.

The ingredients are in cups to make it easier for children who do not yet recognise their numbers, but are able to scoop out a cup. 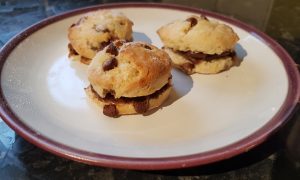 We served these with chocolate spread as you can never really go wrong with chocolate, but marmalade and clotted cream would also work well.