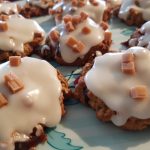 Sometimes I have a recipe idea in my head, but the road to creating it is paved with a few kitchen disasters and sometimes a sugary mess which tends to end up in my tummy! Luckily I now have the foresight to test a recipe before I even attempt it with the children or I would have three very disappointed little people when this happens!

Creating this recipe was enjoyable, calorific, but yes enjoyable.  Sticky Toffee pudding is one of our family’s favourite puddings and I wanted to create a biscuit which perfectly encompasses what we like about a good sticky toffee pudding.This recipe also takes considerably less time than 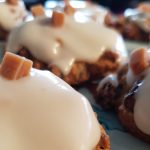 making an actual sticky toffee pudding which means there is less time between starting the activity and enjoying the fruits of our labour!

The addition of oats and ground almonds to create flapjack-like biscuits means that they can be dolloped onto the baking tray rather than having to refrigerate biscuit dough before rolling and cutting it out. This is great for children who get frustrated when they can’t lift an intricate biscuit cutter design from the surface by themselves to put on the baking tray without it breaking. We have had tantrums from little people in our house when such an incident has occurred. Also as it is a biscuit, it could be an acceptable snack as a treat or pudding for hungry little tummies.

I have also made this recipe substituting the self raising flour and oats for gluten-free equivalents and used sunflower spread instead of butter and the results were also good, but you may need to cook them for a little less time. They do end up with more of a cakey texture with the gluten-free products, but they still taste good. If you require a nut free alternative you could just omit the ground almonds. I add them as I like my sticky toffee pudding to have a nutty flavour and texture.

These quantities will make a very firm icing, you could make it runnier to resemble the toffee sauce that you have with sticky toffee pudding. This will make them messier to eat and if your little people are anything like mine, they may well need a bath after having one!

These biscuits have become a firm favourite in our household as all the kids can help out. Even the youngest at 21 months enjoys trying to have a mix and dollop them onto the baking tray. I hope you enjoy them as much as we do!